Traditions are more than dates on a calendar. They’re the moments that bring us together. For all of us, traditions are an opportunity to make our mark on the people and places we love the most.
York Traditions Bank was created in 2002 to help the individuals and businesses in their hometown succeed. The founders envisioned a community bank that would grow right alongside their friends and neighbors. Now, they are helping folks throughout the Susquehanna Valley under a new moniker: Traditions Bank.

Gene Draganosky, president and CEO of Traditions Bank, has been part of the local organization since 2008. Draganosky says, “While the name and logo have changed—who we are, what we stand for, and what our customers and communities experience have remained the same.”

The new Traditions Bank logo is one of deep meaning. A six-part cube represents the original core values the bank was built upon. Their refreshed values include things that were impli ed but never spelled out, like equity and inclusion and community commitment. Draganosky says, “These updates make our core values even more impactful.”

Within the logo, the subtle presence of the letters T and B can be spotted, as well as the letter Y at the very center, a nod to their York roots. As Draganosky says, “We never want to lose sight of where we started.”

“For us, it’s more than just processing your checks and making loans. It is a higher calling,” says Draganosky. “It’s about people serving people. It’s about making a difference in people’s lives.”

With a new branch in Lancaster, plus a presence in Harrisburg and Hanover, Traditions Bank looks forward to helping people realize their aspirations beyond the bounds of county lines. For Draganosky, the Susquehanna River is not a great divide between communities, but rather a unifier. To remain independent, he recognizes the importance of growth.

“Typically, when banks are acquired, the things that they stand for—their values, their culture—are going to change,” he says. “We want to remain independent. We want to continue serving all the communities we serve with local support and decision making.”

Draganosky and his team of associates at Traditions Bank are committed to helping people make their mark in the world their own way—and that transcends geographic boundaries.

What is your hope for York County in the next five years? “However they define success, York’s individuals and businesses allow us to play a small role in helping them achieve it. They are the reason for our success and growth. Helping them make their mark on the world is how we make ours.” – Gene Draganosky, President & CEO, Traditions Bank 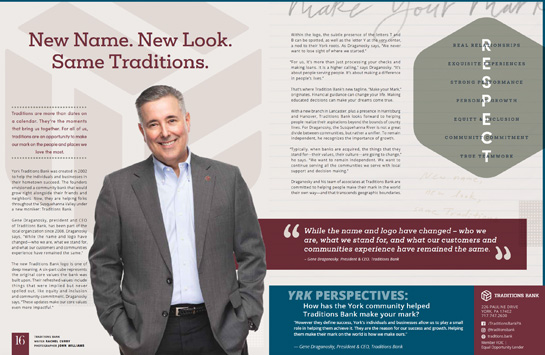