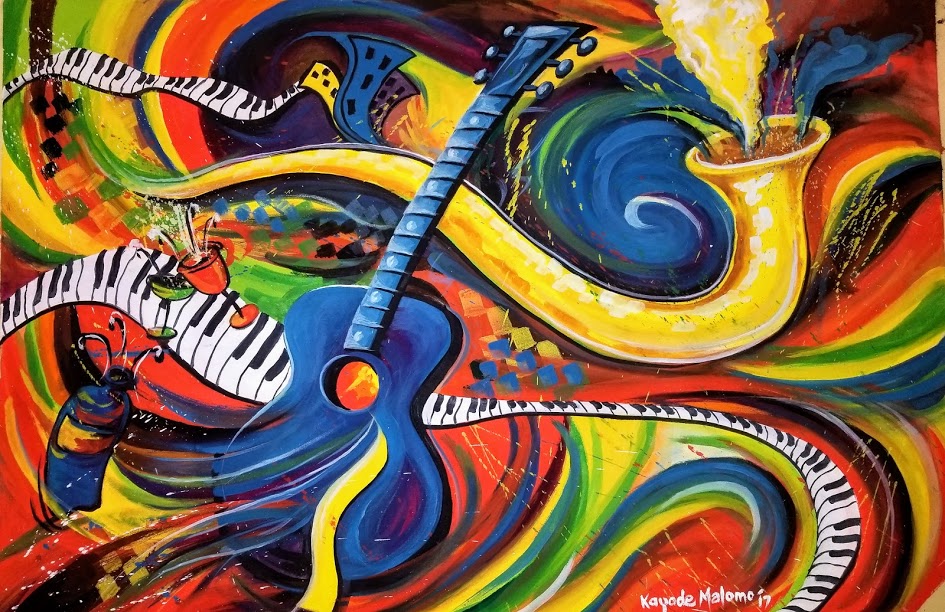 ARTWORK/"RHYTHMS OF EXCITEMENT" BY KAYODE MALOMO

Art has played a significant part of downtown York’s culture — from the Murals of York that tell the stories of the city’s history to the local galleries featuring the artwork of emerging young artists and art veterans. As the downtown art scene advances and grows, it continues to be a hub for creatives who grew up in York and newcomers who strive to make their impact on the city.

Kayode Malomo — a financial advisor at New York Life Insurance in Harrisburg by day and artist after work hours — is a fairly new resident of York who, through his art, strives to make a positive impact in York. Originally from Nigeria and previously a resident of Philadelphia, he has a considerable amount of honorable achievements already to his name.

Kayode says he somewhat inherited his creative side from his father who was a drama and stage director who brought productions to stages. Kayode also dabbled in acting as a child and appeared on the Nigerian national TV series Tales by Moonlight and The Problem Studio. He expresses how thankful he was to have parents who not only encouraged him academically, but also nurtured his artistic ventures as a young adult.

While pursuing his undergraduate degree in political science with a minor in economics at the University of Ibadan, Nigeria experienced years of civil unrest, stalling Kayode’s schooling for two years. Having some free time on his hands during this period, he worked to enhance his artistic skills. Designing and creating personalized greeting and birthday cards was one of his creative outlets.

At age 17, he co-founded MalomsyArt, a graphic and multimedia firm with his brother. He has been commissioned to paint for dignitaries such as the presidents of Nigeria, Sierra Leone, and Mali, as well as the mayor of Philadelphia, Pennsylvania.

After achieving his undergraduate degree, he relocated to Philadelphia to pursue his MBA at Temple’s Fox School of Business. During his time in the City of Brotherly Love, he gained a number of artistic achievements and collaborated with many Philadelphia-based artists. His artwork has been featured in the African American Museum. He has been featured by the Philadelphia Museum of Art as part of its “African Art, African Voices” art exhibit, and he appeared in a feature film In Their Own Voices, an interwoven portrait of four African artists in Philadelphia.

A New Chapter in York

While in search of a place to live with a shorter commuting distance to Harrisburg, Kayode learned about York through a close colleague. The thriving art scene and historical richness of downtown York are what made Kayode want to bring his wife and two sons to York. While he’s lived in York only since the summer of 2017, his artwork has been featured in some York art exhibits including “Pieces of Us,” a group exhibit of artworks by first-generation immigrants to the United States from all over the world, at Creative York and “Melodies & Art,” a Black History Month art exhibition at Gusa by Victoria. He serves on the board of Salem Square Library where he has participated in some educational youth programs and where some of his artwork resides.

Outside of his professional and artist life, Kayode has a very philanthropic side to him and loves giving back to his community in any way that he can. He frequently spoke to the youth of Philadelphia, children ages 5 to 17 years old. Discussing the importance of education and leading art workshops with young people are some of the ways Kayode loves to give back to his community. It’s the work he wants to continue to do in York.

Much of his artwork, vibrant and warm in color, depicts subjects from everyday life in Nigeria to jazz-inspired scenes and influential historical figures such as Winnie Mandela. Inspired by his father’s words “Life’s short, but your art is long,” Kayode stresses that he wants his artwork to be the catalyst of meaningful discussion among young people. Inspiring youth and bringing joy through his artwork are what motivates him to continue to create positive and impactful artwork.

A young African-American female studentgirl who saw one of Kayode’s paintings at Salem Square Library depicting young black individuals reading open books said the books look like birds with wings taking off in flight. She believes the books represent that education will allow her to succeed in this world and the sky’s the limit for her. An individual who worked at Salem Square Library shared what the young girl commented with Kayode, and he said Kayode says that sometimes the young kids who see his artwork bring to light different interpretations of the messages behind the artwork that he wasn’t aware of before. The different ways young people analyze and take meaning from his paintings bring him joy. Kayode wants his art to be his legacy that continues to bring joy to others now and long after he’s gone, fulfilling the prophecy of the meaning of his name, “God has brought joy.” 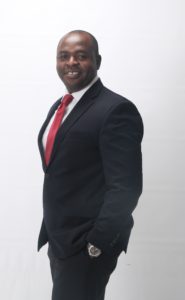 Photo of Kayode Malomo by Michel Thomas of VSN Network