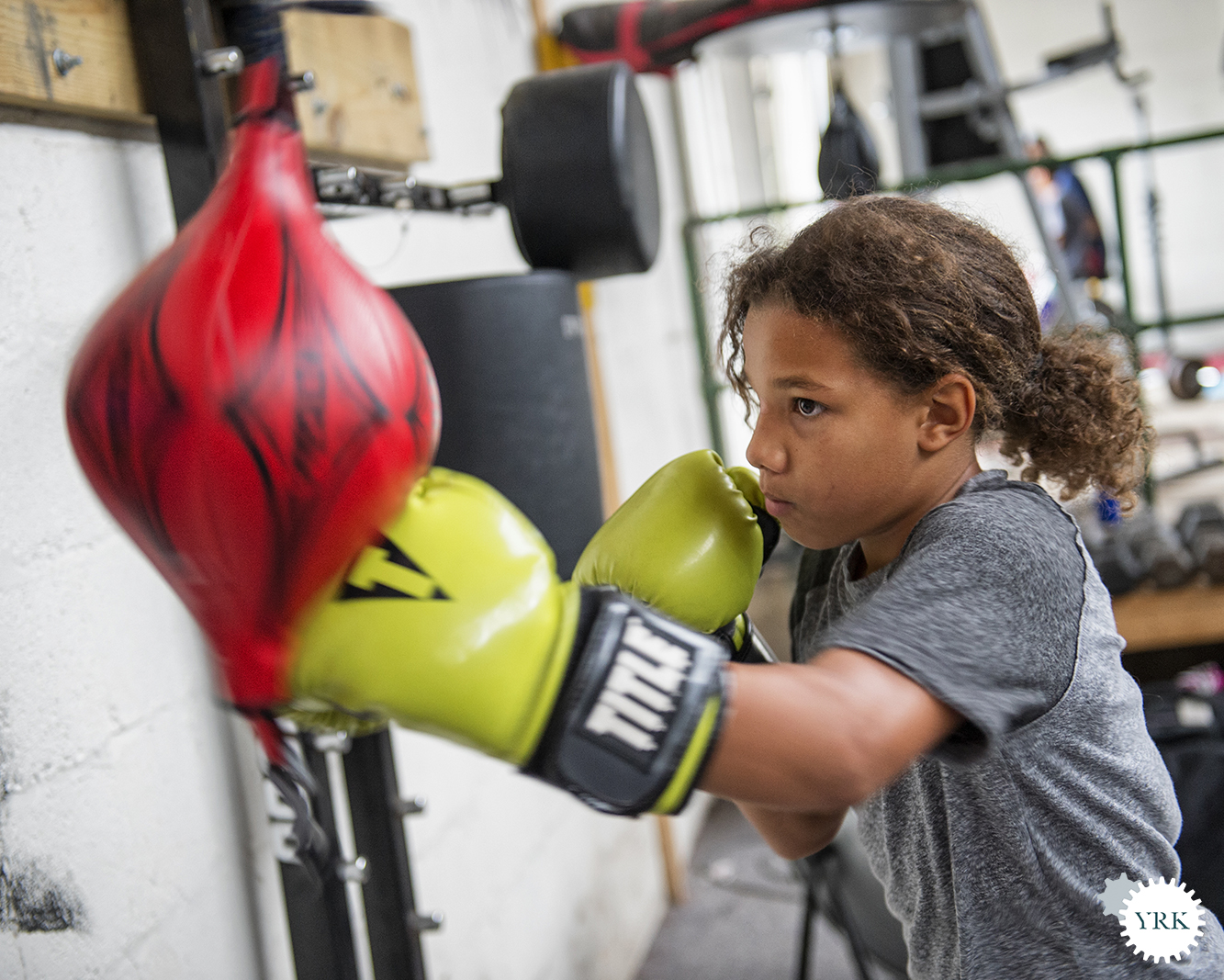 A Space for York County Youth to Grow

A gym. A boxing ring. A safe haven for youth. Stick-N-Move Boxing was born in 2009 in the heart of downtown York. For Antwoine Dorm, what started as a job helping children at Bell Family Shelter and a boxing hobby grew into much more than he could have ever imagined.

Antwoine saw the need for a space in the York community and his own capacity to provide it: a space for kids to not only learn how to box, but also learn how to live, to grow — a place that was safe for them after school instead of the street corner. Now, nine years later and with eight years as a certified nonprofit, his mission is strong and sure: Keep kids off the street at the lowest possible cost.

Stick-N-Move Boxing began at the Princess Street Center in downtown York and the Yorktown Community Center in Fireside during its first few years. Both locations were funded through City of York Recreations and Parks Bureau, allowing Antwoine’s services to be offered for free. It didn’t take long for the community to flourish. Some days, Antwoine would see over 70 kids come through his doors to box, to train, and to talk.

Soon, Antwoine realized that the kids were serious about the work they were doing at Stick-N-Move; they were talented boxers who wanted to compete. Because Antwoine didn’t have a boxing ring in the Yorktown Community Center, the program wasn’t being taken seriously in the boxing world. He knew his next step was to expand, but that it would come with a challenge. In a building with room for a boxing ring, he’d have to pay rent — and he’d have to start charging his students.

CrossFit York welcomed Stick-N-Move with open arms, and here, even with the new fees, the program’s numbers grew dramatically. Children flocked to the gym from all over York County, not just the York City area. Eventually, Antwoine and his boxers moved again, into the back of New Grounds Coffee Shop on W. Market Street. But in three years, with only a short 30-day notice due to building issues, they were forced to move again. Thankfully, they found a temporary home with Lincolnway Sportscenter at 2601 W. Market St., where they’re currently located, though only for the next month or so.

‘Boxing is Just a Vehicle’

Antwoine may be a boxing coach and a trainer, but he’s aware that boxing is just a way to get the youth through his doors. In the past, Stick-N-Move has had Susan P. Byrnes from the Byrnes Health Education Center teach the kids about topics such as hygiene, first aid, and healthy eating. Antwoine and Stick-N-Move work with York County programs such as JusticeWorks and Diakon Adoption & Foster Care, as well as multiple schools in the York City School District. Recently, York College has paired with the gym to bring in students from the college to tutor kids in the program.

Antwoine is aware that the youth in York County need mentorship, companionship, and space to grow while they’re young. He’s passionate about countywide issues like bullying and violence. “What I add to the York community is that I’m not afraid of these children. These kids are our future and also the ones you’re reading about in the paper. People are reading this stuff and just shaking their heads, but not doing anything to help. I’m not afraid to look in the next murderer’s eyes and help them.”

Antwoine says that when he travels for boxing matches, people often ask him why he keeps his program in York. They tell him that the city is too small or that he can’t make a large impact there. He knows that they’re wrong. Because of the small size and close proximity, Antwoine sees firsthand the amount of damage that violence and bullying has on children in the area — and he also sees the way that his program positively impacts the community.

“The moments when the kids come and say proudly, ‘Look, I did this or this,’ moments that have nothing to do with Stick-N-Move, moments they’re coming back to say thank you. That’s big. That’s the most amazing thing. It doesn’t matter what happens inside our four walls.” Antwoine has story after story about the influence that Stick-N-Move has made on neighborhood kids —and that’s why he stays local.

Antwoine is humbly asking for any help they can get. The new building needs a lot of repairs, supplies, and plumbing and electrical work. Because all the money he makes from the program goes to rent, he’s created a GoFundMe page for anyone who’d like to donate to Stick-N-Move. He’s also asking for help from anyone who knows how to get access to grants or funding, or someone with an open building for rent, as Stick-N-Move is only able to inhabit this location for a year and needs to start searching for a permanent spot.

One of Antwoine’s greater dreams is to see one big facility in York City with multiple programs for kids together under one roof, as well as being able to provide his services entirely free again. “I don’t feel as though I have the best program or I have answers for everything,” he says. “There’s a lot of great programs in York, but they’re all scattered around instead of working together.” He’s asking that any other nonprofits looking to partner with him to please contact him, too.

“If I could give my younger self advice, it would be don’t get discouraged. I still do sometimes, sometimes I think we should be further along than we are right now.” However, even with the current challenges, “I trust that it’s going to work out. This is for the children.”