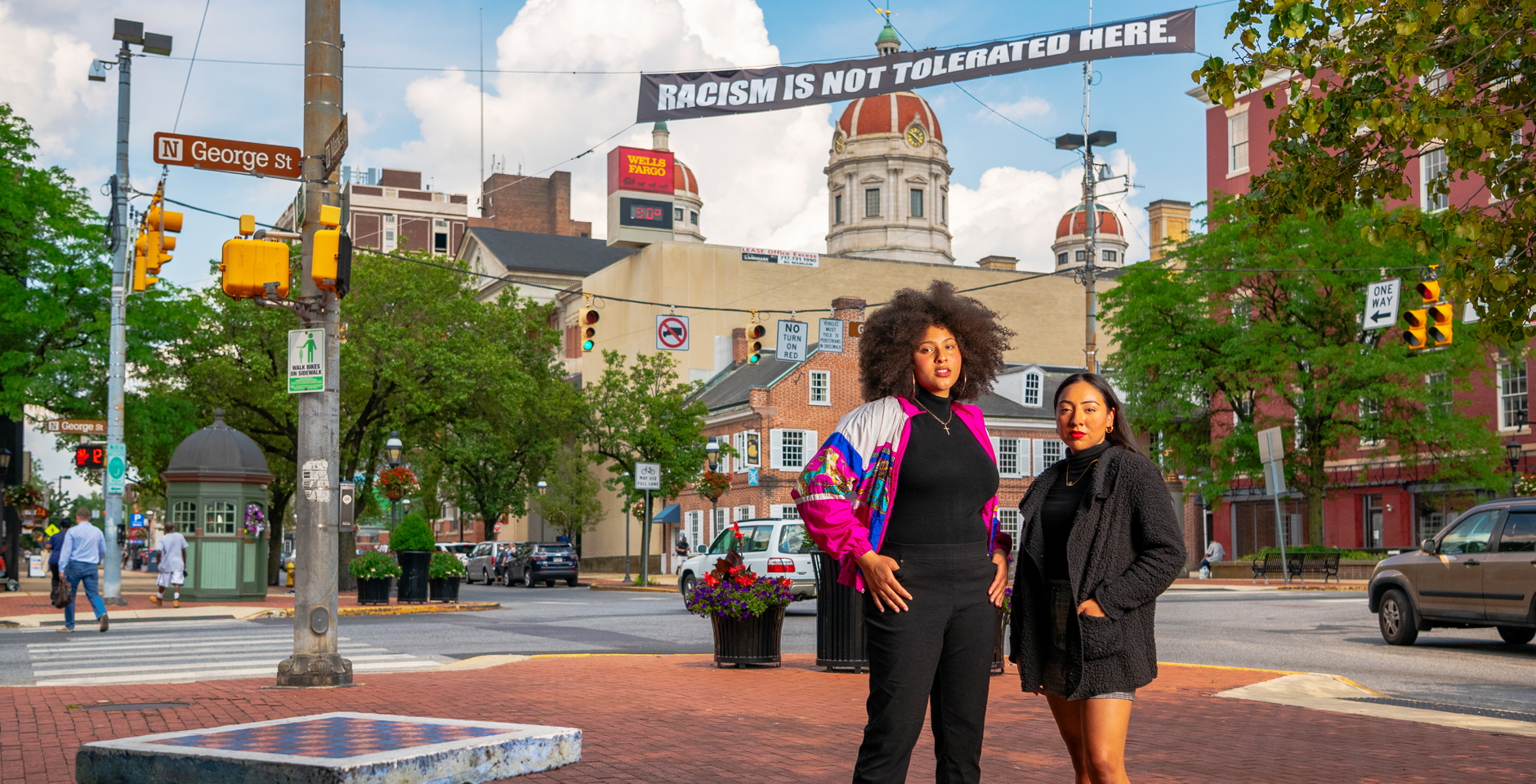 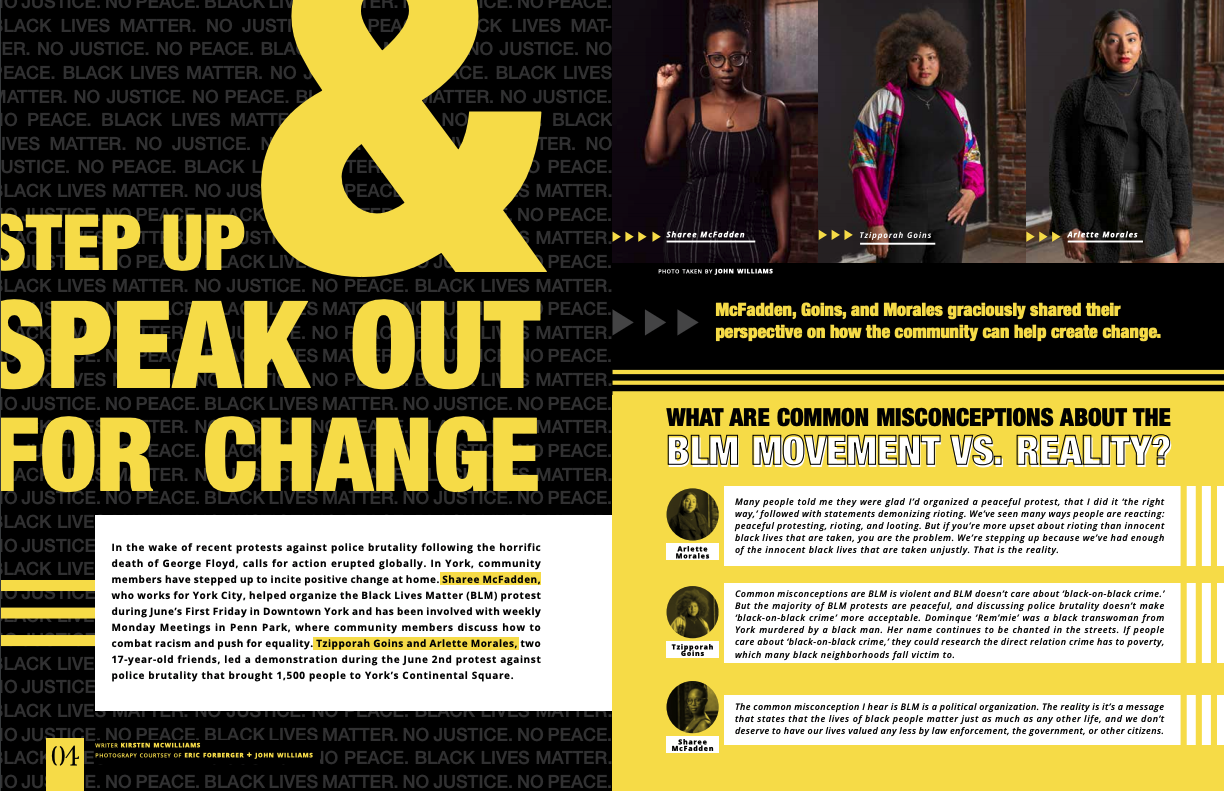 Step Up Speak Out for Change: Black Lives Matter

In the wake of recent protests against police brutality following the horrific death of George Floyd, calls for action erupted globally. In York, community members have stepped up to incite positive change at home. Sharee McFadden, who works for York City, helped organize the Black Lives Matter (BLM) protest during June’s First Friday in Downtown York and has been involved with weekly Monday Meetings in Penn Park, where community members discuss how to combat racism and push for equality. Tzipporah Goins and Arlette Morales, two 17-year-old friends, led a demonstration during the June 2nd protest against police brutality that brought 1,500 people to York’s Continental Square.

What are common misconceptions about the BLM movement vs. reality?

McFadden, Goins, and Morales graciously shared their perspective on how the community can help create change.

Many people told me they were glad I’d organized a peaceful protest, that I did it ‘the right way,’ followed with statements demonizing rioting. We’ve seen many ways people are reacting: peaceful protesting, rioting, and looting. But if you’re more upset about rioting than innocent black lives that are taken, you are the problem. We’re stepping up because we’ve had enough of the innocent black lives that are taken unjustly. That is the reality.
– Arlette Morales

The common misconception I hear is BLM is a political organization. The reality is it’s a message that states that the lives of black people matter just as much as any other life, and we don’t deserve to have our lives valued any less by law enforcement, the government, or other citizens.
– Sharee McFadden

How can York get involved to make change?

Our black and brown deserve the proper education, proper and affordable housing, and healthy well-balanced meals. Voting is a very important step to seeing change. Support black businesses, sign petitions, and donate if you can. Don’t just go to a protest and stop there.
– Arlette Morales

I want black businesses to rise. I want to see artists who support each other and collaborations across art, music, film, and business. If you want to make real change, commit to fighting to the end. One protest doesn’t change much, but a persistent city looking for a change will guarantee reform.
– Tzipporah Goins

Take a look at yourself first. Identify areas where you may have contributed to the problem of racism, discrimination, and prejudice. Speak up in your home, family, and at work about what you see, even if your voice shakes. It will take a massive revolution to begin to dismantle a system, yet it can only take a moment to educate someone and show compassion and empathy.
– Sharee McFadden 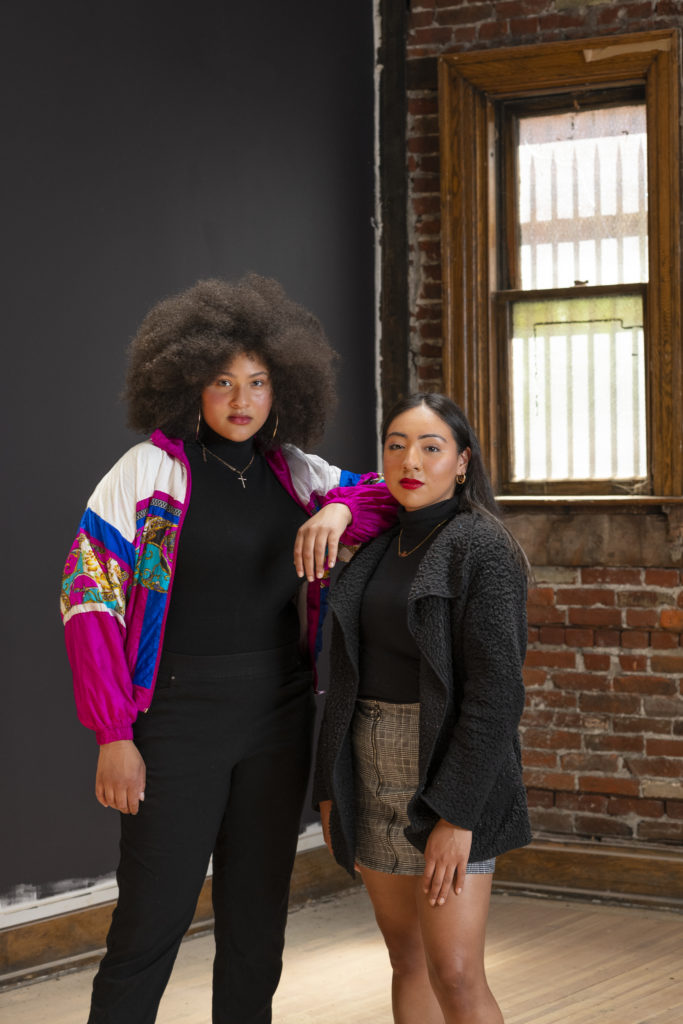 How has the York community supported the growth of Black owned small businesses?
“In my honest opinion, which is all I can offer, the York Community, as a whole, could be more supportive of black owned businesses. By investing into black owned enterprises as a customer or investor, York would certainly and FACTUALLY see a difference in our local economy. Prior to Covid-19, the City introduced a new micro lending program through an online, international social platform called Kiva, which helps underserved, and underrepresented business owners (traditionally minorities) gain access to capital to through social lending. This is important because access to capital has consistently been a barrier to the success and longevity of black owned businesses in York.”
– Sharee McFadden, City of York RDA and Economic Development Specialist, Entrepreneur and Community Activist