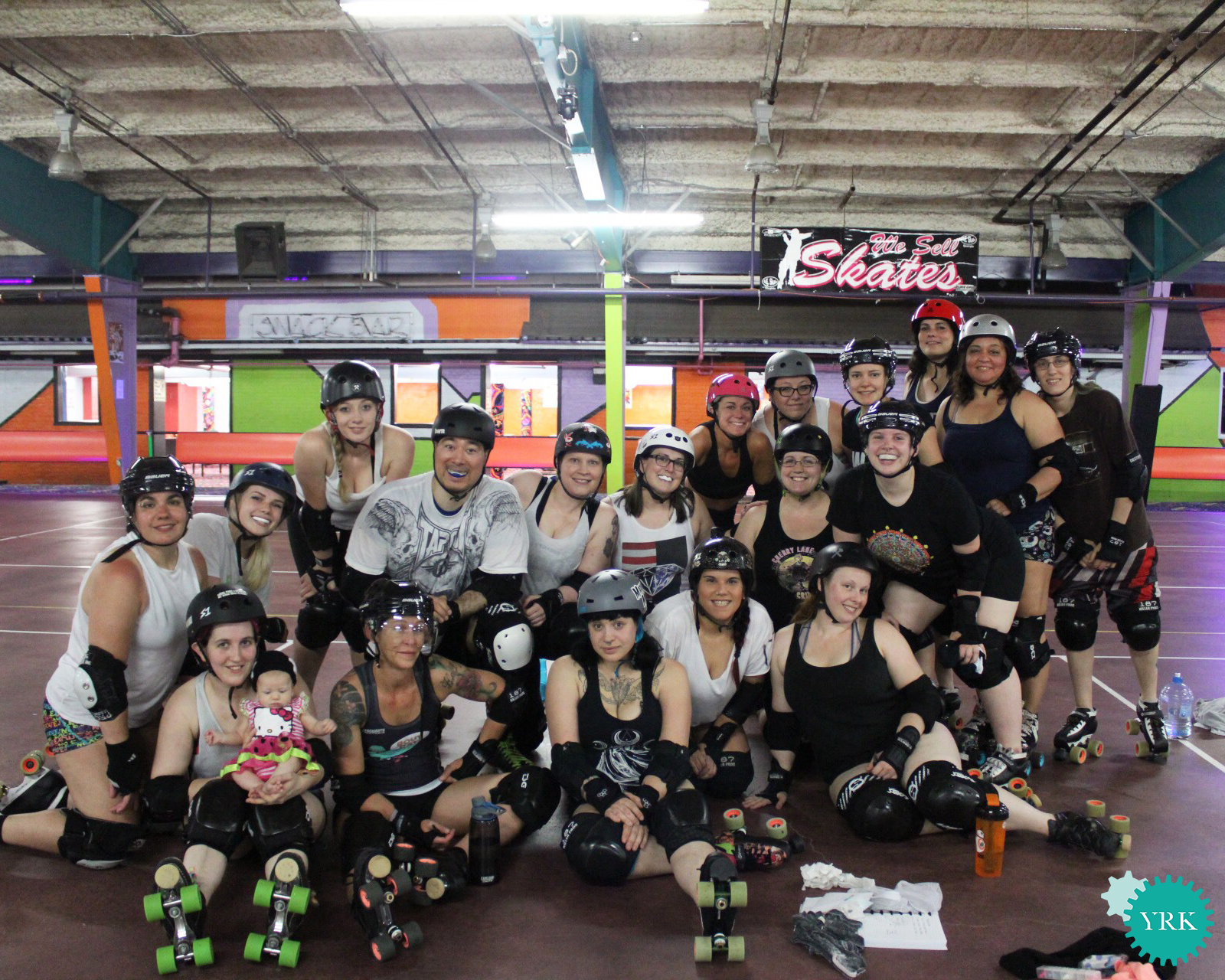 The York City Derby Dames: Not Your Grandma’s Roller Derby

A sharp, loud whistle sounds off and roller skates hit the skating rink floor with forceful impact as skaters build momentum and rush forward in a counterclockwise formation around the rink. The screech of wheels abruptly breaking and teammates cheering and encouraging one another echoes throughout Roller ‘R’ Way Family Skating Center in York. This scene offers only a small taste of what a roller derby practice is like, and it was exhilarating to watch. The York City Derby Dames (YCDD) were gracious enough to allow me to get a glimpse of what preparing for a roller derby match looks like.

Not too many residents of York are aware that York City has its own female roller derby team, but we do! The York City Derby Dames are a group of strong, intelligent, multitalented women representing York in roller derby.

The Beginnings of the York Derby Dames

How did this amazing team of butt-kicking women get started? Coach Jamie “Devour” Moore had the desire to start a team in York in 2013. At that time, no roller derby team existed in the area. She had participated on a roller derby team in Harrisburg for some time, but she wanted to create a team closer to the place where she grew up and now lives. Coach Moore knew other roller derby players who lived in the area and played on teams in other cities, and she also knew people in the York area who showed interest in the sport and wanted to participate. She saw the need for a roller derby team in York and fulfilled it.

Coach Moore started a grassroots effort to build her team by handing out flyers, promoting roller derby on Facebook and spreading the word in person. Now, five years later, she has a strong and continually growing team of more than 20 members.

According to Coach Moore, many teams have an intense four- to six-week boot camp for tryouts. York Derby Dames don’t necessarily roll like that. While their training process isn’t easy, they are inclusive and give anyone who wants to join an equal shot at growing, becoming stronger and learning the sport of roller derby.

Speaking of inclusivity, the team accepts transfer players from other teams who moved to the York area and are looking to join a roller derby team. The York Derby Dames have an open enrollment policy and welcome all those who want to join the team as long as those who want to be members of the team are open to learning, putting in the hard work and not being afraid of getting a little bruised along the journey.

The Importance of Family and Support

The York City Derby Dames is like a big family. If you attend a YCDD practice or game, expect to see kids on the sidelines running around and cheering on their moms. Being a mother herself, Coach Moore allows her players to bring their kids to practices and understands that these women have lives and responsibilities outside of roller derby. Besides being derby queens, past and current members hold other titles such as super mom, nurse, mechanic, ICE agent, scientist and more. The team is not only diverse in the occupations they have, but also in their ages, which range from about 18 to 45.

It’s inspiring and energizing to see a group of more than 20 women of different generations working cohesively together as a team on the rink. Roller derby is not only a game of extreme body contact or aggression, but it’s also a game of strategy and communication. During practice, the York Derby Dames practice their drills of charging, sprinting and perfecting their jamming and blocking techniques all while communicating either verbally, or most importantly, nonverbally. Much like chess, reading the body language of teammates and opponents to anticipate what’s going to happen next is an important aspect of the game. You must be two steps ahead of your opponent if you want to win.

Naturally, the kids who attend practices and games with their moms become interested in the sport while watching their moms on the rink. For this reason, Coach Moore wants to start a junior team — no junior roller derby team exists in the York area. Coach Moore wants to fulfill that need and create a space and environment where kids can learn discipline, hard work and teamwork as they learn how to build confidence and positive relationships — all skills youth can take with them into adulthood. Moore is a natural coach and enjoys helping others become better on the skating rink.

“I like watching each skater grow, or when my skaters have those light bulb moments when they finally perfect a technique after practicing and practicing for a while,” she says. “That’s my favorite aspect of roller derby and what I enjoy experiencing as a coach.”

While continuing to grow and build the team and future junior team, Coach Moore hopes to lead, mentor and coach a new generation of roller derby players in the process.