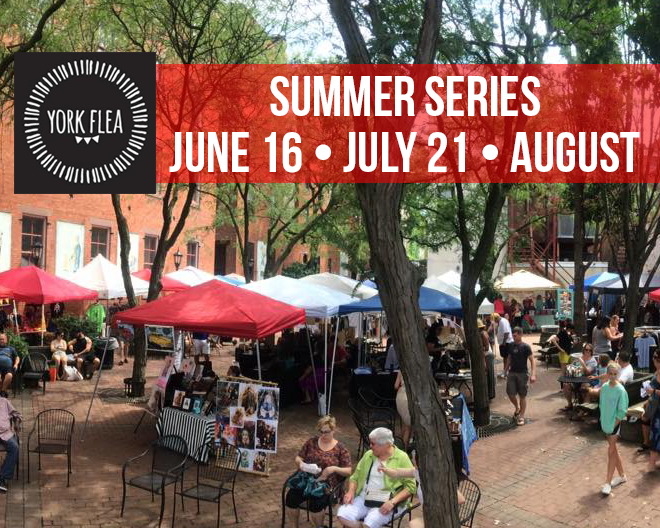 York Flea: Vintage, Handmades, and Music in the City

Picture your ideal Saturday in York City. The white pear trees that line Market Street are in full bloom. The smell of Central Market’s many lunch options seeps around the corner. And down Cherry Lane, there’s the York Flea: tent after tent of the most unique vintage and handmade vendors in South-Central Pennsylvania, accompanied by the sound of York’s incredibly talented local musicians.

The York Flea was born in 2015 when Jessica Weikert and Ariel Linebaugh combined their love of vintage with Kristen Dempwolf’s event planning experience. In only three years, it’s become one of Downtown York’s most bustling and anticipated events.

Kristen says she was inspired to start the York Flea not only because of her love for event planning, but also because she’d always been inspired by the friends and makers in her own life. She wanted a way to give back and use her own talents to support them.

Before the York Flea, no events in York showcased handmade and vintage vendors alone. Typically, the vendors were only an added value to another event. The founders of the York Flea wanted to highlight the creatives and artisans, giving them full opportunity to display their craft, especially because for the many traveling vendors who don’t have the opportunity to own a typical brick-and-mortar location.

What to Expect for the York Flea

Kristen, who has now taken over the York Flea solely under her personal business By K Events, has plans to collaborate with local businesses and expand the event in the future, especially after the huge success of the most recent York Flea in April with Collusion Tap Works.

Held in the parking lot of the brewery, patrons could truly make a day of the event — grabbing food at surrounding restaurants such as Taste Test Restaurant Incubator and sipping beers from Collusion Tap Works while they shopped down the alley. Colorful murals painted by locals provided a beautiful backdrop for the live music. Kristen was excited about the success of the event, her biggest yet: “It’s not just my event anymore; now it can become everybody’s.”

Her long-term goal for the York Flea is to create a model that can travel, bringing the York Flea as a microcosm of York City to bigger events around the state and providing more opportunities and successes for the vendors who participate.

Kristen explained that without the community that she’s found in York, there would be no York Flea. After moving to Philadelphia for two years after graduation, she realized something was missing for her there that she couldn’t quite put her finger on. “I didn’t know what it was [about York] until it was gone.”

Her move back to York allowed her to begin her own event planning business as well as start events such as the York Flea. “It’s not me; it’s the support system that surrounds me.” With the volunteers, vendors, musicians and businesses that collaborate with the York Flea, Kristen says, “It truly takes a village and I wouldn’t have that village anywhere but York. I love it here and I don’t think I’d be able to do the things I do without this community.”

Spring and summer in Downtown York is truly a magical time for festivals and events, and the York Flea is spearheading the excitement with its summer series. Look for the flea market to pop up in Cherry Lane on the third Saturday of every month: June 16, July 21, and August 18 from 10 a.m. to 3 p.m. Walk through and experience the charm for yourself.

For more information or to apply as a vendor, visit the York Flea’s site. Follow York Flea on Instagram and Facebook for all the updates and event details.